The following basic functionality applies to all 4 Draft it versions:- Free ,  Plus,  Pro &  Architectural.

Draft it Version 4 is faster and more powerful than previous versions whilst retaining its acclaimed ease of use. It is a 2D CAD software for suitable for all users, in the office or at home. You can create, print and save your own drawings and designs.

Draft it's easy to use snapping and co-ordinate input make drawing construction an almost effortless process. When drawing the system displays dynamic dimensions so you can visually check distances/sizes, or you can type in sizes directly. Alternatively you can snap to end points, mid points, intersections etc. where Draft it identifies the type of snap as the cursor passes over it.

In the example here you can see a line being drawn between various points (we remove it each time for clarity). You can see how Draft it displays the available snap point when the cursor is positioned near to it. Accepting a snap point requires just a click.

The next example also drawing a line demonstrates switching input methods, once again the line is removed each time for clarity.

After clicking any position to start drawing a line, a dynamic line is attached from this location to the cursor. There are three options to select from, 'snap', 'X,Y' and 'Polar'. The snap setting as demonstrated in the example above allows selection of existing points on the drawing.

In addition to the above Draft it allows relative co-ordinate input. This means at any time a new position can be defined relative to existing entities, eliminating the need in many cases for creating specific construction geometry. This feature is invoked by simply holding down the 'R' key when over an existing snap point to switch on the 'X,Y' or 'Polar' input methods.

Once drawn Draft it entities can be dynamically edited, the example here shows what happens when a line is selected. The rectangles at either end and in the middle are called 'handles'.

These can be clicked on and moved. You click on either of the blue handles to move that end of the line or click in the red one to move the entire line.

This is the basis of editing in Draft it. Multiple entities can be selected and modified like this with the option to use dynamic dimensions or snaps to select new positions.

Dimensioning is very easy using Draft it as demonstrated by the following linear dimension example video. A linear dimension requires three points to be selected, two points to measure between and one to place the dimension itself. Once the two points are selected the position and orientation are controlled as the cursor is moved around. Simply click as required to define the 3rd point.

The following images explain the options in a little more detail. In each of these the two points have been selected to dimension between, Draft it now requires the final point to finish the dimension. We have labelled four dotted lines to help explain the possibilities. You will see that if the cursor is between A & B, then the dimension is always horizontal (1st image). 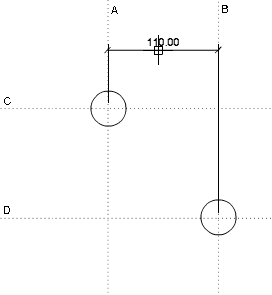 A vertical dimension is achieved when the cursor is between C & D but not A & B (i.e. the centre square in the next image). 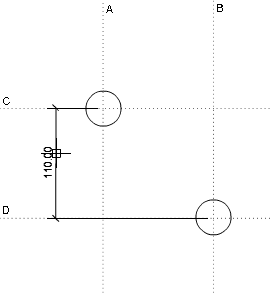 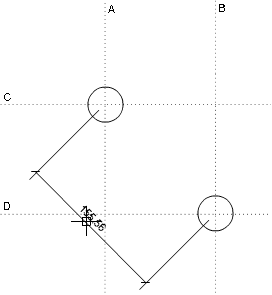 Find out about more basic Draft it functionality available in all versions.

Do you have a question?

If you need help deciding which of our CAD systems is right for you.
Or maybe you need to chat about our bespoke development service.

Call us, email us, we are here to help.